The Meaning of the Perpetual Help Picture 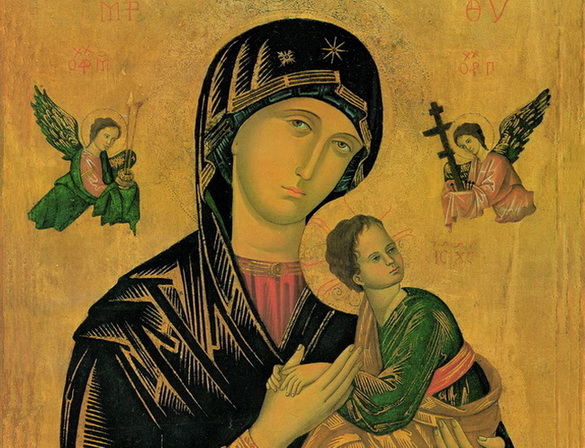 This beloved picture may look strange to modern Western eyes. It doesn’t portray Mary as a delicate maiden with downcast eyes. Her direct gaze and strong features command our attention. We are struck by the unrealistic qualities of the figures. Jesus is qualities of the figures. Jesus is the size of a toddler, but his features are those of an older child. Mary and Jesus aren’t set in a scene but float against a background of gold.

This picture was painted in the Byzantine style of the Eastern Church. The purpose of this style of art is not to show a beautiful scene or person but to convey a beautiful spiritual message. Because the artist is trying to communicate something more glorious than anything in this world, the picture isn’t a realistic portrayal. A Byzantine painting is like a door. Seeing a beautiful door is nice, but who wants to just stand there looking at the door? We want to open the door and go beyond it. The door might be attractive or unattractive, but it is only a door, there to lead us into a new world.

That’s how we must approach this picture. The artist, realizing that no one on earth would ever know what Mary or Jesus really looked like, and that their holiness could never be depicted in purely their beauty and their message in symbols.

What does this picture tell us about Mary and about Jesus?

What do you see when you look at this picture?

First of all you see Mary, because she dominates the picture and because she looks straight at you – not at Jesus, not at heaven, not at the angels above her head. She looks at you as if to tell you something very important. Her eyes seem serious, even sad, but they command attention.

This is an important woman, one of power and position. She is set on a gold background, a symbol of heaven in the middle ages. She is dressed in dark blue robes with a green lining and red tunic. Blue. Green and red were the colors of royalty. Only the Empress was allowed to wear those colors.

The eight-point star on her forehead was probably added by a later artist to represent the Eastern idea that Mary is the star that leads us to Jesus. To reinforce the symbolism, there is an ornamental four-point cross to the left of the star on her headdress. The letters above her head proclaim her the Mother of God (in Greek).

Looking at the painting, we know that she has the power to intercede for us in heaven.

Mary’s gaze is fixed on you, but her arms hold Jesus. In Byzantine icons. Mary is never shown without Jesus because Jesus is central to the faith Jesus too is wearing the clothes of royalty. Only an Emperor could wear the green tunic, red sash, and gold brocade portrayed in the picture. The Greek initials to the right of the child and his halo decorated with a cross proclaim that he is “Jesus Christ.”

What would frighten a little boy, even the Son of God, so much?

The figures that hover on either side of Jesus and Mary – the Greek letters above them identify them as Archangels Gabriel and Michael – provide us with the answer. Rather than carrying harps or trumpets of praise, they bear the instruments of Christ’s Passion.

On the left, Michael holds an urn filled with the gall that the soldiers offered to Jesus on the cross, the lance that pierced his side, and the reed with the sponge. To the right, Gabriel carries the cross and four nails.

Jesus has seen part of his destiny – the suffering and death he will undergo. Though he is God, he is human as well and afraid of this terrifying future. He has run to his mother, who holds him close in this moment of panic, the same way she will be close by his side through his life and death. While she can’t spare him his suffering, she can love and comfort him.

So why is Mary looking so intently at us instead of her child in need? Her gaze brings us into the story, makes us part of the painting and the pain. Her gaze tells us that just as Jesus ran to his mother and found refuge, so too may we run to Mary.

Her hand does not clasp the hands of her frightened son in a protective grip, but remains open. Inviting us to put our hands in hers and join with Jesus.

Mary knows there are many things in our lives that are dangerous and terrifying, and that we need someone to turn to in times of suffering and dread. She offers us the same comfort and love she gave to Jesus. She tells us to run to her as fast as Jesus did, so fast that we don’t even think about what we wear or how we go, just so we get there.

What are you waiting for?