The Story Behind the Mural of the Stations of the Cross 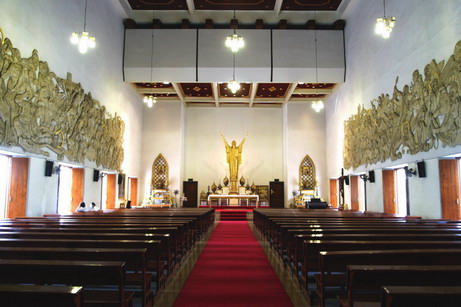 Interior: The interior adapts Thai forms to Catholic liturgical needs. Throughout the church one is visually stirred by the passion and Redemption of Christ. Father Harry Thiel commissioned the 40 Meter-long reliefs of the Passion of Christ on both sides of the nave and the statue of Christ the Redeemer.

They were designed in 1970 by the masterful Philippine architect VIRGILIO (Ver) Manipol. First, his fullsize drawings were attached to the walls. Wire mesh was then attaches with nails to form a three-dimensional armature. Cement and plaster were next applied and finally the general form of the figures was sculpted be trowel, brush, and refined by hand. After the

surfaces dried an antique finish was applied. A similar method was followed for the monumental sculpture behind the altar that was subsequently painted gold.

The collaboration between Fr. Thiel and Ver resulted in a highly Original presentation of Christ’s passion, Death and resurrection. In addition to the fourteen tradition Stations of the Cross, the Agony in the Garden of Gethsemane (far right) and the Resurrection (far left) are also included. A beautiful, wave-like movement visually links each episode and draws us into the gripping drama of the Way of the Cross. The Passion begins with Christ’s anguished vigil in the olive grove. He ends his plea to escape the suffering that loomed before him in Jerusalem with an act of total resignation, “not as I will, but as Thou wilt.”

The shared grief at his painful humiliation that is so deeply felt by the Women of Galilee, Veronica (the image of Christ on her veil is extraordinary) and other faithful followers seems to be reflected in the grimacing henchmen. Like the Good Thief who recognized who Jesus really was, their physical Distaste for the brutality they inflict suggests that they, too, sensed Divinity in His broken humanity.

After the mournful entombment the reliefs culminate in great joy with the risen Christ bounding from the tomb. “Death is swallowed up in victory” (1 Corinthians 35:54), as seen in the magnificent sculpture of the triumphant Christ the redeemer. The cup of suffering of Gethsemane has been transformed in to the Eucharistic chalice. And the revelation of Easter gives us confidence to build a Kingdom of God on this earth in the sure and certain hope of Resurrection.